An Alloy Monster is a type of Monster Card that is colored darker red-brick, almost similar to Effect Monsters. They are stored in the Extra Deck. In Yu-Gi-Oh! W, Alloy Monsters are Summoned by fusing the elements found in monsters to form a greater monster.

To Alloy Summon it, a player must assemble the monsters required which are listed on the card itself. Unlike Fusion Monsters, monsters do not need to have the exact name depicted in the card and Alloy Summoning doesn't need the "Fusion" Spell Card. However, the Level of the monsters must be the same as stated in the Alloy Monster a player wished to summon before they can be used as Alloy Materials. Because Alloy Monsters belong in the Extra Deck, they return there whenever they would be returned to the hand or Main Deck, like Fusion Monsters. Also, like Fusion Monsters, they cannot be Special Summoned from the Graveyard if they were not properly Alloy Summoned first. 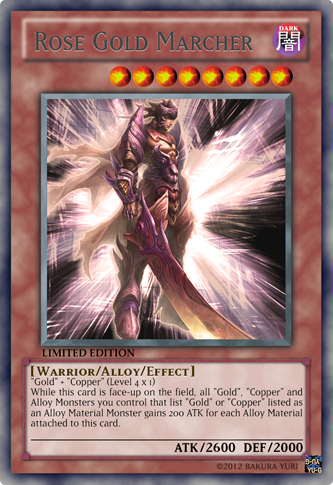 Retrieved from "https://ycm.fandom.com/wiki/Alloy_Monster?oldid=285836"
Community content is available under CC-BY-SA unless otherwise noted.