Asuyu Sakaki is the daughter of Yuya Sakaki and Zuzu Akaba Boyle. She's one of the Counterparts' Children.

Asuyu has her mother's dark pink hair combed in an ovoidal shape (similar to a bob cut), with her father's dark green forming a "dome" over her head. She ties a lock on the right side of the head with a dark red elastic to form a little ponytail, similar to the one Zuzu keeps in her adulthood. Just like her brother Yushi, her eyes are of a purple shade in between Yuya's red and Zuzu's blue, with a shape remiscent of both parents.

She usually wears a lilac shirt with a red left-hand sleeve and a blue right-hand sleeve that features three yellow stars (one of which leaves a curved red-green-blue trail), a pale turquoise skirt, white knee-lenght socks, and light blue sneakers. She likes to keep a You Show Duel School badge pinned to her shirt over her left collarbone, and a silver bracelet with a heart on her right wrist, the latter because it makes her feel like "a big and strong girl like mom".

Her Duel Disk is a purple compact model with an orange blade.

Asuyu uses "atashi" as her pronoun of choice, to emphasize her appareance of "young and cute little girl". Like her father and her big brother, she switches to the formal "watashi" during her Entertainment Duels. Also, while she normally uses the polite "anata" as second-person pronoun, she tends to switch to the more condescending "anta" while talking to her brother, due to their relationship.

Asuyu is a generally childish and cheerful girl. However, when together with her brother, they often argue with each other. She also can be highly competitive, determined to defeat without mercy anyone who challenges her to a Duel, more so if that one is Yushi. She does this to make clear than despite how small and girly she is, she is perfectly able to hold her own against anyone.

She loves fairytales and mythology, especially those based about magical animals. This is reflected by the Deck she uses.

Sometimes when she is certain to be about to win a Duel, she will starting acting up as her father's Entertainer side, presenting her finisher very theatrically as in Yuya's Entertainment Duels. When she happens to do this against her own brother, it pretty much results in a battle where they try to out-over dramatic each other.

Her name is portmanteau of her parent's names, though Yuya's part is pronounced differently. This fact is similar to Yushi's.

Asuyu first appeared in the ZEXAL-centered fic "Together In The End", she is seen as a baby with her parents and her brother Yushi, attending the funeral of Yuma Tsukumo and his wife Tori Meadows.

In "Not Her", 9-years-old Yushi and 3-years-old Asuyu watch their mother comforting their father after the latter had a nightmare. The boy then carries the girl to back to bed, much to her annoyance.

In "Children of Standard", Yushi and Asuyu start to bicker over watching TV, when their father suggest them to settle it with a Duel. The two siblings do so, watched by their parents and Amane, who came because she and Yushi decided earlier on chat to hang out together that morning. Both siblings give their all to each other, culminating in a final turn that was very similar to an Entertainment Duel, which ends with Yushi's victory. However Asuyu acknowledges the need to practice more and become stronger, vowing to beat her big brother one day.

Just like Yushi, she admires her parents, and wishes to be as great as them when she grows up. She's always all fired up to see his parents Dueling, though the fact that they leave Yushi babysitting her annoys her greatly.

As both consider themselves actual children of Yuya and Zuzu, Yushi and Asuyu are very close, and sometimes take part in Tag Duels, just like their parents. However, their relationship as similar to the one between the Kastle siblings: they argue very often and annoy each other, leading to frequent Duels between them.

Asuyu, again like Yushi, is very loving of the other three children of the other conterpart couples, as they were rised as siblings, though she's slightly closer to the two girls than her brother, and she spends some time with them to do girl things like an actual trio of sisters.

Despite this, the antics displayed by Rise sometimes annoy her.

Asuyu uses a "Ritual Beast" Deck, which focuses on Contact Fusion with support from Pendulum Summon, much to the satisfaction of Yuri and Rise. She chose this Deck because of her love for tales and myths that talk about magical animals and their tamers.

If need arises, Asuyu is also able to use some Synchro or Xyz Monsters, mainly WIND and/or Psychic-Type ones.

"Young apprentice of the riders! Green scout with hidden talent! Powerful duo who blocked many evils! When the tamer and their partner dominate their powerful bond in the mystical whirlpool, no evil shall prevent their victory! Pendulum Contact Fusion! Descend, ultimate spirits of harmony! Level 10. Holy Spirit Beast Mount... Gaiapelio!"
— Ritual Beast Ulti-Gaiapelio — 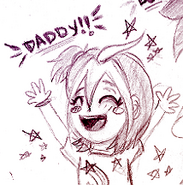 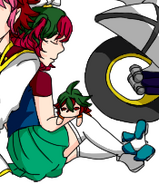 Kah-hoa-raverkeinst
(Tumblr)
(DeviantART)
Add a photo to this gallery
Retrieved from "https://ycm.fandom.com/wiki/Asuyu_Sakaki?oldid=312845"
Community content is available under CC-BY-SA unless otherwise noted.