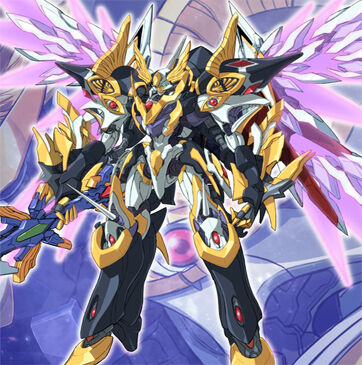 The Holy Knight, known as the Knights of God (神の騎士) in the OCG, are a series of Warrior-Type monsters. Their names include "Holy Knight". They rely on their high ATK multiple "Holy Knights" and the use of their effects, and as such a Deck revolving around them is often based on the Beatdown strategy and causing a large amount of damage to the opponent. This deck features a new sub-type called Resolve. These cards are Summoned by Resolve Summon

This is one of the most straightforward "brute force" decks built and relatively easy to use because of the synergy between the monsters, it has high overall flexibility. Also, cards like "Royal Decree", "Jinzo" and "Magic Jammer" are needed to prevent your opponent from activating any Spells and/or Traps. "Sakuretsu Armor" and "Mirror Force" should be used to prevent attacks and clear the field.

"Holy Knights", much like "Blackwings", require field presence to properly swarm and attack. Any card that prevents them from doing so for a turn slows them down greatly. Because of their mainly LIGHT attributes, "Light-Imprisoning Mirror" can create problems for "The Holy Knights". This problem can be solved by negating or destroying the card with "Mystical Space Typhoon".

"Holy Knights" are currently a very effect-reliant Deck. Without their effects, they are practically only beatsticks. The most threatening effect to be negated, however, is that of "Holy Knight Lancelot". The negation of the effect of "Holy Knight Galahad" makes the Knight player open to previously unfeared Spell and Trap Cards, and allows a player locked down by "Galahad" to attempt a comeback. The common method used to negate "Knight" monster's effects is simply "Effect Veiler", as it is the most effective monster effect-based negation (Spells and Traps are usually negated by "Galahad"). Unfortunately, there is no easy way for a "Knight" player to combat this.

Retrieved from "https://ycm.fandom.com/wiki/Holy_Knight?oldid=165219"
Community content is available under CC-BY-SA unless otherwise noted.