Beware: This page was created before "Judgment Arrows" debutted in the anime, and does not necessarily reflect the canon rulings of Link Spell Cards. Treat it as a fully fanon concept.

A Link Spell Card, known as a Link Magic Card (Japanese: リンクカード Rinku Mahō Kādo) in the OCG, is a Spell Speed 1 Spell Card that stays on the field once it is activated.

Link Spell Cards share the same mechanism with Link Monster Cards; possessing Link Markers which could create Link Zones. Monsters whose Link Marker is pointing to them are said to be directly linked to the Link Spell Card.

Link Spell Cards also possess GUARD and DEF. They can be targeted by attack from an opponent monster provided that GUARD condition is not fulfilled.

While in theory, all Extra Deck monsters including but not limited to Fusion, Synchro, Xyz, Link and Spiritual Monsters can be Special Summoned from the Extra Deck to a Main Monster Zone that is currently a Linked Zone, Link Spell Cards usually have limitation, stating what could be Special Summoned by the card.

GUARD contains single digit numerical number ranging from 0 to 5 and it can be found written at the bottom right of the card. The number indicates how many monsters is required to be directly linked to the Link Spell Card in order to prevent it from being attacked.

The major difference between Link Monsters and Link Spell Cards is that the latter does not create "universal" Link Zone. Link Spell Cards have gray text written on it, clearly stating what monsters it is capable of Special Summoning from the Extra Deck.

The limitation measures capability and should not be confused as restriction. Thus if the same Monster Zones is linked by a Link Monster, then the player is free to Special Summon any monsters from the Extra Deck, provided there is no restriction being imposed by the Link Monster.

When it is first activated, it will remain face-up continuously with Link Effect activated. Its Link Effect is replaced by Link Equip Effect once it is equipped to a monster. The process is irreversible by normal means. 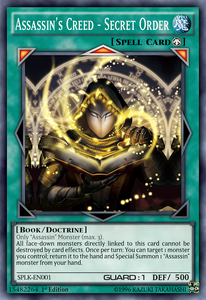 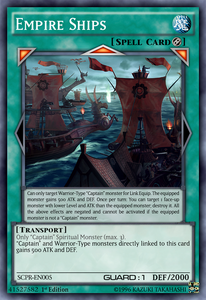 Link Equip Spell
Add a photo to this gallery
Retrieved from "https://ycm.fandom.com/wiki/Link_Spell_Card?oldid=291927"
Community content is available under CC-BY-SA unless otherwise noted.