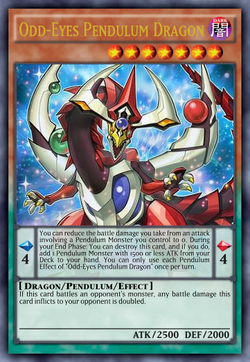 Pendulum Monster is the new type of Monster Card introduced in Yu-Gi-Oh! ARC-V. They act as either Monster Cards or Spell Cards (hence, their color coding being half orange (yellow if they have no Monster Effect) and half green), and can be placed in the new Pendulum Zone. These monsters can be used to perform Pendulum Summons, a new mechanic that allows a player to perform high-level summons.

As the Pendulum Effect and the Pendulum Scales take up the space where the Set Number would usually be placed, this value is placed in the bottom left corner of the card instead, in the same line as the ATK/DEF values of the Pendulum Monster.

Retrieved from "https://ycm.fandom.com/wiki/Pendulum_Monster?oldid=285189"
Community content is available under CC-BY-SA unless otherwise noted.