View source
watch 01:36
We're Getting Mutants in the MCU - The Loop
Do you like this video?
Play Sound

Rise Sakaki is the son of Yuri Sakaki and Celina Akaba Boyle. He's one of the Counterparts' Children.

Rise has Yuri's dark purple hair with two thin sidetails around his face, and Celina's indigo bangs shaped like a deformed upside-down star: the lower tip comes down his nose, the lateral two are long and suspended like Yuri's two tails, and the top two go up like Yuri's spikes. He also has his father's pink eyes, with a shape remiscent of both his parents. While his eyebrows aren't weird like Yuri's, they are still thicker than average.

His usual outfit is vaguely similar to Yuri's uniform when he was younger, with the Paradise Prep School uniform with an encircled star on the sleeves (similar to the ones of young Celina's uniform) and pink necktie, over a light blue undersuit.

His Duel Disk is an ARC-V Duel Academy model with black-trimmed indigo body and red blade.

As his pronouns, Rise uses "boku" and "kimi" just like his Yuri, as a way to sound casual but polite and not too condescending, even while teasing others. He may also use the very polite "anata" while trying to flirt with his fangirls or being playful with his friend Cassandra.

Rise's personality is similar to his Yuri's: on the surface, he is a polite and formal boy, and coupled with his flirty displays, he gets a club of fangirls from the students.

Despite this, when he is with very close people (such as with his "siblings"), or when he deemes one of his Duels as interesting and fun, some bits of his obscure side slip out, and he starts showing a teasing attitude and superiority complex (such as claiming to be the strongest Fusion Duelist). Despite this, he never does mean any harm, and tries to avoid hurting his opponents even when in "Yuri mode".

Like Celina, he's often bored and (mildly) annoyed by weak opponents, and seeks good challenges in the other best students. Watching his Duels during lesson breaks is a popular thing to do among the other students of the school. Another thing in common with her is a desire of showing off his own worth and skills without any external help, as such he never remotely considers options like using his fathers' status as the savior of the dimensions or Dueltainers to his own personal advantage.

His name is portmanteau of his technical parents' Japanese names (Yuri + Selena). It is written with kanjis that roughly mean "advantaged over the world".

Rise considers Yuri and Celina as his actual parents and respects them very much, and believes that since they were the best students of the Duel Academy when they were younger, he will be as such as great, if not more. Dad and son often like to tell each other lame jokes.

Rise is very friend with the three children of the other conterpart couples, as they were raised as siblings. However, his attitude causes him to have a vitrolic relationship with Runo and Rito, and while the two actual Sakaki siblings treat him better, they are sometimes annoyed as well by his antics.

Cassandra and Rise are close friends, and sometimes their dialogue implies a attraction to each other. While Rise admits to have a soft spot for her, Cassie prefers to tease him and never reveal her true feelings for him. They also consider each other rival charmers, competing for who has he largest fanbase. However, just about anyone can see the obvious unresolved tension between them. It is no coincidence that the two are called Fusion Prince and Princess of the Paradise Prep School. But, while Rise is pleased to do what she wants, he is far from blindly following her like the other male students do.

Rise and John are best buddies, and at the same time rivals, as two of of the Paradise Perp School's best students. As result, they often Duel each other. This is one of the reasons he changes Decks: to find one that can overcome Rise's. Unlike other rivals in the franchise, however, John has no problem admitting he views the other as a good friend.

Another reason for their rivarly is for Cassandra's affections. However, unlike so many similar situations in media, they never let this cause grudges, agreeing that such a thing should be resolved in fights between gentlemen with no hard feelings involved.

John also sometimes likes to rub the fact that he's much more muscular in Rise's face, at with point Rise often replies that it doesn't matter as long as he can wipe the floor with him at Dueling. 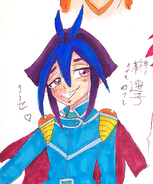 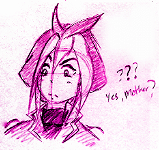