Rito Obsidian Sakaki (Rito Kurosaki Sakaki in Japanese) is the daughter of Yuto Sakaki and Lulu Akaba Obsidian Boyle. She's one of the Counterparts' Children.

Rito has midback-lenght black hair (albeit purple-tinge), with chest-lenght lilac sidetails like Lulu. Her bangs are styled like Yuto's, but swept to the bottom-right like Lulu's, and lilac-colored as well. Her eyes are fuchsia like Lulu's. Rito's hair naturally spikes up like her father's, but she ties it down in a tail using a green elastic, making her greatly resemble her mother.

Her usual attire consists of a pale-pink jacket over a light-blue sleeveless sweater, a yellow skirt, blueish gray socks, and black ballet flats. Her Duel Disk is an Heartland model with pink body and angled cyan blade.

Rito is very formal and uses the neutral pronoun "watashi". However, when she begins to lose her calmness she gradually switches to more condescending speech patterns.

Rito is a quiet and shy girl, and usually she doesn't speak much, but she's very intelligent and analytical, even if she tends to be a bit negative. However, she almost never turns down Dueling, which she genuinely enjoys as it can manage to bring her out of her introversion and give her a little confidence, even if momentary.

Rito also has her hidden depths. When she's emotionally triggered, she sometimes loses her usual calmness and lashes at the reason of her mood change. It can be caused by provoking her, for example by making fun of, or hurting, her or of her friends in front of her. Because of this, she has the fear of losing her own control.

Despite being similar in multiple ways to the Awakening as experienced by Yuya's counterparts, according to Declan's studies it appears to be something slightly different and yet unknown.

Her name is a portmanteau of her technical parents' Japanese names (Ruri + Yuto). It is written with kanjis that mean "heart of reason".

Shay was immensely happy when he became uncle and cares deeply for his niece, just as he once did for his sister. He tends to spoil her, bringing her a little gift every time he comes to visit. In turn, Rito is very fond of him, treating him as a (yet another) parent.

Runo and Rito are form a typical "tomboy and girly girl" duo of sisters. When she's with her, Rito opens up more than with others, and is always amused by Runo's antics.

Despite her personality, Rito has a vitrolic relationship with the Fusion brother, and she's often annoyed by his "trolling" attitude. If she's in a bad mood, then one of the few reasons possible is that he just irked her.

Rito is very close with the actual Sakaki siblings as well, but she a bit closer to Asuyu, as she sometimes spends time together with Runo and Rito to do girly things, just like a trio of normal sisters.

Makoto was the first kid who tried to befriend Rito at school, since the others tended to ignore her due to her quietness. It took a while for the Xyz counterpart child to warm up to him, but they became close friends, and now he's Rito's most intimate confidant outside her family.

While Makoto's behavior tends to be deemed childish by their schoolmates, Rito says he finds him cute and amusing, so he often makes little scenes to try to make her laugh and cheer up.

Makoto is also one of the few students who aren't scared by her episodes of pseudo-awakening, and every time it happens he's the first person that tries to restrain her and calm her down. 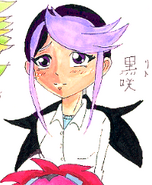 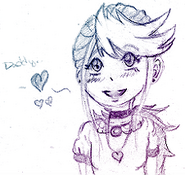 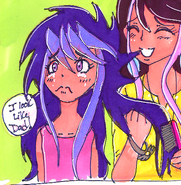 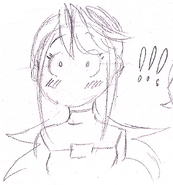