Ritual Monsters, colored blue, are Monsters that can only be Special Summoned with their corresponding Ritual Spell Card. Examples include "Black Luster Soldier", "Magician of Black Chaos", "Paladin of White Dragon", "Crab Turtle" and "The Masked Beast".

So, for example, if "Relinquished" was Ritual Summoned via the "Black Illusion Ritual" card, a Tribute of at least 1 Level would be required, so any Monster could be offered as a Tribute, since you can't have a monster below Level 1. However, with "Black Luster Soldier" or "The Masked Beast", 8 Levels are required, so you either need to Tribute a few low-level monsters (around level 3 or 4), or one powerful Level 8 card, such as "Blue-Eyes White Dragon". In a Deck dedicated to Ritual Monsters, it is not uncommon to use one Ritual Monster as Tribute to Ritual Summon another, often times a second copy of the one that was Tributed.

If a Ritual Monster is discarded to the Graveyard (with cards like "Delinquent Duo", or "Graceful Charity"), without it being Ritual Summoned with the appropriate Ritual Spell Card beforehand, it can't be Special Summoned from the Graveyard with cards such as "Premature Burial", "Call of the Haunted", "Monster Reborn", or "Fulfillment of the Contract". "Magician of Faith" or "Dark Magician of Chaos" can be used to return a used Ritual Spell Card back to your hand, while cards like "Monster Reincarnation" can be used to return the Ritual Monster back to your hand. "Preparation of Rites", a Spell Card from Stardust Overdrive, will return a Ritual Spell from your Graveyard to your hand and simultaneously search out a Ritual Monster from your Deck.

If a Ritual Monster was Ritual Summoned successfully and destroyed in any way, or removed from play, it may be Special Summoned by cards like "Monster Reborn" or "Return from the Different Dimension", unless it has restrictions that prevent it from being Special Summoned.

In a sense, Ritual Monsters are easier to summon than Normal or Effect Monsters of the same Level, since all you need is:

This can be useful in getting a powerful monster onto the field very quickly, without needing monsters on the field to Tribute. It does, however, take a heavy toll on your hand. However, cards such as "Advanced Ritual Art" can forego using cards from your hand and/or field altogether, and use monsters from one's Deck as Tribute Fodder instead. The "Djinn of Rituals" introduced in Stardust Overdrive, such as "Djinn Releaser of Rituals" and "Djinn Presider of Rituals", can be banished while in the Graveyard for use in a Ritual Summon as well as being Tributed normally, while also giving the summoned Ritual Monster stronger abilities.

You can Summon a Ritual Monster of any level for free if you either use "Ritual Foregone", though such a monster cannot attack and will be destroyed during the End Phase. In addition, "Advanced Ritual Art" can be used should you a sufficient amount of Normal Monsters, while "Ritual Raven" can be used as the entire Tribute while Summoning a DARK-[Attribute]] Ritual Monster. 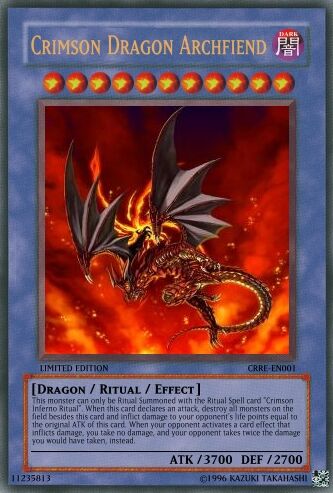