Runo Sakaki is the daughter of Yugo Sakaki and Rin Akaba Boyle. She's one of the Counterparts' Children.

Runo has a large hairdo combed in a curvy spiral fashion and swept to her left, similar to Yugo, but with the spikes wrapping around all the head and colored Rin's aqua-green. Over the forehead she has a blonde tuft, curling upwards similar to Rin's bangs but much smaller, from which two thin sidetails hang around her face. She has Yugo's light-blue eyes, with a shape remiscent of both her parents.

Originally, her hair was to be more angular and colored cobalt-blue, but it was changed to make her look more distinct from Yugo.

Her usual outfit is a skin-tight pink riding suit (similar to Akiza's) with green stripes running over it, as well as orange pads over the breasts, shoulders, elbows, and knees; pink gloves, and orange motorcycle boots.

Due to being used to her suit, Runo often feels uncomfortable wearing formal clothes, so her Paradise Prep School uniform is a long-sleeved version of Zuzu's blazer-less custom without necktie and the collar kept unbuttoned, and she sleeps with long-sleeved pajamas and stockings.

Her Duel Disk is a custom model shaped like Yugo's, with blue circular body and yellow double-blade.

She has a red Duel Runner, built by her together with Yugo and Rin, dubbed "Flaming Star".

Runo uses the very informal pronoun "atai". While its origins are in the lower classes and it is currently common between those who want to be bad girls and female delinquents, in the future its usage gradually morphed into becoming something akin to a female version of the notorious "ore".

Runo can be described as "hyperactive ditz", an energetic and light-hearted girl. But at the same time, she's a bit tomboyish, as she really likes traditionally "male things", such as mechanics and electronics. As such, she's very good with motor vehicles and computers, like Rin. She tends to spend time with both boys and girls of her age. In moments of excitement, Runo can sometimes become a little naive and forgetful.

Much like Yugo, she's a bit of a glomper, sometimes invading others' personal space, calling others "bro" and "sis". However, when she starts to know someone well, she quickly learns how to not make them uncomfortable.

From Yugo, Runo inherited a piece of the Synchronization power. With it, Runo shows a degree of empathy for her fellow counterpart kids, as well they tend to perceive what she is feeling while with them. Due to her personality, this means that they usually feel better.

Her name is a fusion of her technical parents' names (more specifically, Yugo's vowels and Rin's consonants).

Runo first officially appeared in Child of Synchro. She convinced Chase to try the Duel Runner she had built in the past months together with her parents, since she has just passed the junior riding test. However, they happened to meet their friend Samantha on a road testing her own Runner. After a short argument, the two rival girls challenged each other to a Turbo Duel, with Chase reluctantly pulled along as Runo forgot about him in the heat of the moment. Throughout the Duel Runo was repeatedly cornered, until Sam finished her by revealing a Double Tuning Synchro Monster much to everyone's shock. She then received the congratulations of their parents for trying her best and shook Sam's hand in respect, promising her to set the score in the next Friendship Cup.

Considering them her actual parents, Runo loves Yugo and Rin greatly, and idolizes his Turbo Dueling skills, hoping to become like him one day.

Once in a while her mothers drag her into going shopping to buy some casual clothes, though Runo still almost never wears them and keeps her turbo suit, much to Rin's annoyance.

Runo and Rito form a typical "tomboy and girly girl" duo of sisters. When she's with her, Rito opens up more than with others, and is always amused by Runo's antics.

Despite her personality, Runo has a vitrolic relationship with the Fusion brother, and she's often annoyed by his "trolling" attitude. If she's in a bad mood, then one of the few reasons possible is that he just irked her.

Runo is very close with the actual Sakaki siblings as well, but she a bit closer to Asuyu, as she sometimes spends time together with Runo and Rito to do girly things, just like a trio of normal sisters.

Runo and Sam are fierce rivals. They met as little kids at a Friendship Cup where her fathers (through Yugo) and Jack were competing again for the title of King, and got themselves in a argument about who would win. Ever since then, they never lose an occasion to Duel in order to establish which family's stonger. Despite this, they don't hate each other, instead gradually realizing they respect one another.

Runo met Chase the first day of middle school. He is quite reserved, and the other kids seemed to avoid him due to certain rumors, so Runo decided to try to be the first to befriend him. Chase, while a bit reserved at first towards her, soon decided to accept her after he understood she was well-meaning, and now hang out occasionally. Due to, and despite, Chase having somewhat of an aversion to riding, Runo sometimes takes him to go roaming around the City on her D-Wheel.

Due to their similar "hot-blooded" personalities, Runo has developed a fondness for him, and the go along greatly as if they were actual grandfather and granddaughter.

Runo uses a "Jurrac" monsters, which is made up of FIRE Dinosaurs with beatdown strategies, fitting with her personality.

"Harbinger of extinction and evolution, obliterate everything on this battlefield in order to plant new life! SYNCHRO SUMMON! Level 10! JURRAC METEOR!"
— Jurrac Meteor — 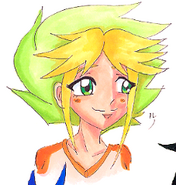 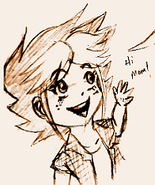 Kah-hoa-raverkeinst
(Tumblr)
(DeviantART)
Add a photo to this gallery

Retrieved from "https://ycm.fandom.com/wiki/Runo_Sakaki?oldid=294648"
Community content is available under CC-BY-SA unless otherwise noted.