XBrain130
Shiyuki Tahita is a Number Hunter. He is first a cold person, arriving to the point of brutally defeat Reginald Kastle and kidnapping Tori Meadows to force Yuma Tsukumo to Duel him. Further in the story, he shows a tendence towards insanity and sadism, enjoying when Yuma was suffering from the attacks of his monsters, and when Astral felt pain from having "Number 53: Heart-eartH" extracted from himself and Xyz Summoned to Shiyuki's side of the field.

He is revealed to be from another universe where Duel Monsters doesn't exist, and the humanity is a interstellar race. He, descendeant of a particular group of human who were remained separated from Earth for some centuries, was the leader of a corporation of exploration and cartopraphy, which explains why his Deck is based on astronomical concepts. A day he is sucked in a Black Hole while exploring an unknown sector, and he finds himself in the Barin World of the future, turned into a wasteland. Here, Don Thousand, who barely survived the Duel with Nash and Yuma, grants him the power of weilding a "Number Over One Hundred" and Ranking Up them, along with a Deck. The Barin then sends him back in time, while impriming in his mind how to Duel, to some days after the battle of Sargasso, just before Vector freed the aforementioned deity from the Barian Sea.

While Yuma and Tori spend a day in date, Shiyuki attacks Reginald, who sends Rio to call Yuma. She arrives just before Tori can confess her feelings, just to her and Yuma's disappoint. Yuma then is shocked to see Shiyuki defeating "Chaos Number 32: Shark Drake Veiss" using only oner card. Shiyuki challenges Yuma, but when he sees him even so slightly unsure, he uses a beam to kidnap Tori, and says him to meet him at the Heartland Academy.

The two Duel, with Shiyuki using various Spell Cards to Summon "Space Gigastar" with 3100 ATK. Despite the initial apprehension, Yuma quickly takes down the Monster. In the next turn, Shiyuki first revives "Gigastar", then steals "Number 53", only to Tribute them to Special Summon the Level 8 "Kha'ak Destroyer" with 5000 ATK. He almost defeats Yuma, but the latter survives. Then, aftyer another turn, Shiyuki Summons a second Level 8 monster. He rightway overlays them to Summon his ace: "Number 130: Galaxy-Eyes Great Space Dragon". Yuma, Tori and Astral are shocked to see a second "Over-Hundred Galaxy-Eyes Number". Yuma narrowly surves again, only to Shiyuki drawing his "Rank-Up-Magic", and calling forth his "Chaos Number Over One Hundred". Once more Yuma is on the brink of defeat, but he finally wins using a combo with his "Utopia" monsters and "Revoke Rank-Up", saving Tori and revealing to her his feelings.

In the end, it all reveals to be a crazy dream of Yuma's. 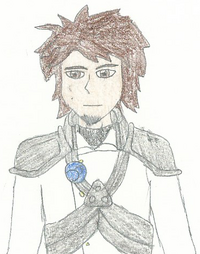 Several years later, Yuma, who is now married with Tori and has the daughter Yuko, takes part to an experiment of a scientist, who says he's creating a virtual similator capable of allow the user to Duel all of his past opponents. In the list, Shiyuki figures too.

The day after, Yuma wakes up alone in his house as Tori and Yuko are shopping. The woman and the child were however just kidnapped by Shiyuki, who was made real by a malfunction of the simulator's energy source. Yuma tries to call Tori with his Duel Gazer, but he instead hears a recorded message left by Shiyuki in Tori's voice mail, prompting him to return the place they faced one.

Shiyuki reveals that this time, each time one of them takes damage, Tori and Yuko will be electrified, much to Yuma's horror. Starting the Duel, Yuma sets up a defensive combo using Defense Position "Gogogo" monsters and "Gogogo Talisman", preventing any effect damage and making Battle Damage difficult to inflict. Shiyuki, however, quickly perfomers a high-Leveled Fusion Summon with "Final Giant Cosmic Galaxy", whose effect gives Shiyuki a indistructible Rank-Up fodder generator. Using then "Chaotic Space" to retrieve his own "Rank-Up-Magic" from his Graveyard each turn, he then proceedes to overwhelm Yuma with a "Chaos Xyz" after another.

Yuma tries to use "Number 96: Dark Mist" to defend himself, but Shiyuki, with some efforts, steals and Ranks it Up, further beating up Yuma with "Number C96: Dark Storm", which reflects to Tori and Yuko through the Duel's rules. After Yuma with difficulty gets rid of the dark Number using "Number 39: Utopia" and "Number 52: Diamond Crab King", Shiyuki shocks him by performing a Synchro Summon. He manages to use his monster's effects to Summon "Number 130", though he can't do much with it due to the fact that he already used its Battle Phase and he can't activate its effects.

Yuma takes advantage of this and manages to reduce Shiyuki's Life Points to 0, at the cost of all of his own ones. Astral then appears, and allows Yuma to survive the double kill, changing his Set card to a one that resets the Duel to 2000 Life Point and 3 cards in hand for each player. Still, Shiyuki brings out "Number C130", but once again Yuma doesn't lose. During the next turn, Yuma pulls out a combo that allows the ATK of "Number C39: Utopia Ray" to theorically increase up to infinite, defeating Shiyuki for the second time.

Kite then arrives and battles "Number 130" with "Photon Dragon", preventing Shiyuki from killing the Tsukumo family with it. With the help of Mizael and "Number 107", "Number 130" is destroyed, and Shiyukis turns into ash along to his cards.

Shiyuki uses a  "Space" Deck, focused on various strategies to heavilly burden the opponent, such as ATK power, destruction and burn damage. It also features a tendency to stealing and using the opponent resources, as showed by cards such as "Xyz Betrayal" and "Space Starship X - Unknown Object", whose effect both Special Summon from the opponent's Extra Deck. This could be because of facing the Number Holders. Interestingly, his own "Number 130" damages a player who takes control of it.

In the first story, Shiyuki relies heavilly on effects to Summon his Xyz Monsters, but if needed he can use Normal Monster swarm support as contingency plan.

During the second story's events, Shiyuki's Deck is revealed to be enough flexible to use all kinds of Monster cards, though they all ultimately support his Xyz Monsters.