Triad Monsters are a new Type of Monster Card, first released in Eternal Friendship. The color of their card frame is red and their borders are blue. These cards are included in the Extra Deck. Triad Monsters require Junction Monsters to be Summoned. To summon a Triad monster, find the Level of the Junction monster you are going to Triad summon with. Then, calculate the number of monsters you are going to summon with (not counting the Junction monster .) By sending them to the Graveyard, you can Summon the Triad monster. Some Triad Monsters require a specific "Junction Monster" in order to be Triad Summoned (such as "Junction Dragoon" for "Darkness Triad Dragon") but most do not. Also, if a Triad monster is destroyed, or if you want to re-summon the Triad material monsters, you can return it to the Extra Deck to Special Summon the material monsters.

Because Triad Monsters belong in the Extra Deck, they return there whenever they would be returned to the hand or Main Deck, like fusion and synchro monsters before. 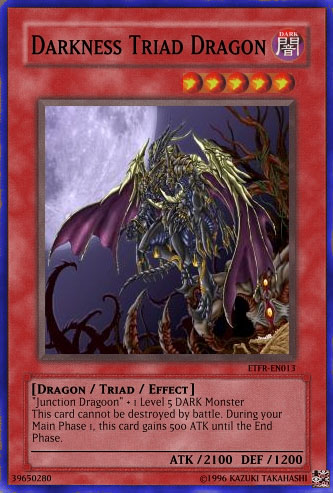 Retrieved from "https://ycm.fandom.com/wiki/Triad_Monsters?oldid=285484"
Community content is available under CC-BY-SA unless otherwise noted.