Union Monsters can be recognized by the fact that, where on an ordinary Effect Monster it would read 'Effect', Union Monsters have 'Union'. Cards such as Dark Necrofear or Kiseitai act as Equip Spell Cards but do not have the text designating them Union Monsters.

Union monsters are a special type of Effect Monster with (Type)/Union in their card text. They can function like an Equip Spell Card, and thus become vulnerable to cards that destroy Spell Cards, such as Mystical Space Typhoon. They equip to the host Monster their text designates and generally grant it additional strength, such as an increase in ATK/DEF. All Union Monsters Destroy themselves to protect the host Monster if it would be destroyed by battle while equipped. The only exceptions are Heavy Mech Support Platform, Spirit of the Six Samurai, and Armored Cybern which protects the monster from destruction by both battle and Card Effects

Union Monsters can either Equip or Unequip to the host once per turn with their own Effect, given they are on the field. Additional cards, such as Formation Union and Combination Attack allow them to Equip and Unequip alternatively.

The Union Monsters introduced the XYZ Archetype (which would later become the VWXYZ Archetype), which had a new way of using their Fusion Monsters. This unorthodox method involves removing the Fusion Material Monsters from play to Special Summon the Fusion Monster from the Extra Deck (This is not considered a Fusion Summon). Polymerization cannot be used to Fusion Summon these monsters. 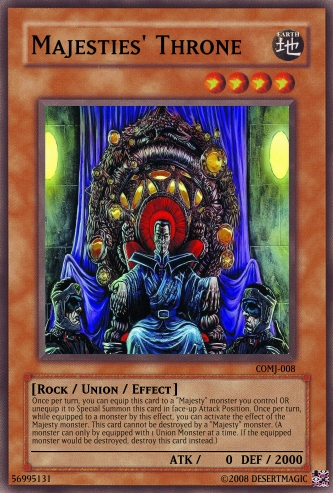 And here is a list of the support cards they use:

Retrieved from "https://ycm.fandom.com/wiki/Union_monster?oldid=310259"
Community content is available under CC-BY-SA unless otherwise noted.