WATER is a very versatile Attribute, and even has a semi-viable Deck based around such monsters, the Water Deck. The Monster Types typically associated with WATER are Aqua, Fish, and Sea Serpent, though Plants and Reptiles are not uncommon Water types. WATER is usually thought of as the opposite to FIRE, though there is no real advantage for either Attribute over each other in the OCG/TCG.

Because of their versatility, Water monsters can be used in a number of strategic ways, possessing many different abilities. Some of the most powerful Water monsters include: "Gogiga Gagagigo", "Fairy King Truesdale", and "Ocean Dragon Lord - Neo-Daedalus". The general strategy for all WATER decks is to create a lockdown on the field for the opponent while building up and replenishing the player's resources. This makes most WATER decks very passive, but that can be a good thing because water decks need some set up time to work their combos correctly. But the most popular Water Deck typically tries to boost the ATK of WATER Monsters with "A Legendary Ocean" while simultaneously lowering their Levels with "A Legendary Ocean" to summon them faster, a very effective strategy when played right. One example would be Giga Gagagigo.

Archetypes include "Cloudians" (with the exception of "Cloudian - Eye of the Typhoon"), "Frogs", and "Ice Barrier" in the "Duel Terminal". They even have their own structure deck Structure Deck 4: Fury from the Deep

Water monsters enjoy great support, especially from Spell and Trap Cards such as Tornado Wall, Big Wave Small Wave, and Salvage. They also have 3 Field Spell Cards specifically targeted towards them, more than any other Attribute:

Also, there is another Field Spell, Wetlands, but only works on Level 2 (or lower) Aqua-type Water monsters, which is most Frogs". Monster cards that aid Water Decks are great in number as well:

Yet another useful card is Steel Shell, an equip card that gives a 400-point ATK bonus, at the cost of a 200-point DEF reduction. Still, it's a net gain and a good addition to almost any water deck.

One weakness of Water Decks and Water monsters in general, is that they rely on Umi or A Legendary Ocean to work to their potential. They lack cards that allow them more draw power, while using much of their hand up. Some of their effects are also rather passive compared to other Attributes, such as Fire's aggression and Earth's reliable defensive tactics. All in all, though, a well-prepared Water deck can be an extremely difficult obstacle to overcome. 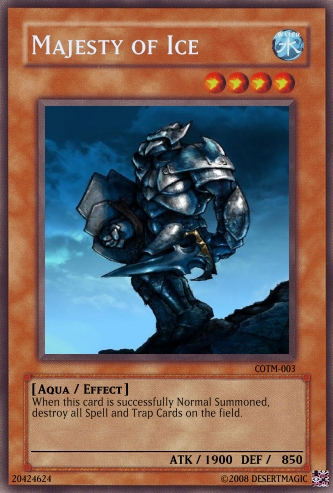 Retrieved from "https://ycm.fandom.com/wiki/WATER?oldid=285268"
Community content is available under CC-BY-SA unless otherwise noted.