Yushi Sakaki is the son of Yuya Sakaki and Zuzu Akaba Boyle. He's one of the Counterparts' Children.

Yushi has mostly his dad's face and red hair, but the frontal layer is her mom's light pink, with similar sidetails framing his face, held in place by an elastic with Zuzu's clips, which he wears to imitate Yuya's googles. His eyes are of a purple shade in between Yuya's red and Zuzu's blue, with a shape reminiscent of both his parents.

His exact clothing varies between artworks, but he usually wears the Paradise Prep School uniform over a brown shirt with a white capital "A" (and sometimes two card backings), blue jeans, and white sneakers. When dressing casually he just takes off the uniform.

His Duel Disk is orange with a purple blade.

Like the protagonists of the canon anime (except Yugi Muto), Yushi uses the informal "ore" as his pronoun, but, analogously to his father, he switches to the formal "watashi" when Dueltaining.

Yushi is very much like Yuya: kind, caring, fun-loving. As his firstborn, Yushi is determined to continue the Sakaki family's tradition of Entertainment Duels, thus he's often theatrical about his Duels, as his father is.

Due to his little sister Asuyu's tendency of bordering into this as well, every time they Duel, it pretty much results in a battle where they try to out-over-dramatic each other.

Differently from most canon protagonists, Yushi grew up without many non-related friends, due to many kids wanting to approach him just because of his famous dad. Because of this, he sometimes might seem a bit of a lone person. This fact partly references Yugi Muto, whose only friend before the start of his adventures was Téa Gardner.

While Yuya sought to use his Entertainment Duels to amuse people and make them smile, Yushi's style leans more towards keeping his watchers in awe and thrill them using his Deck to recreate scenes and situations like those typically seen in action and/or fantasy movies. Indeed, Yushi is fond of media belonging to these genres.

"Yushi" name is a portmanteau of his parent's names, though Zuzu's part is pronounced differently.

Read literally, it can mean "game child", referring to his status as the son of the then-current King of Games in XBrain130's timeline (as Yuya gained the title by defeating Yuma Tsukumo, and Yuma before him won it from Yusei Fudo).

Yushi first appeared in "Documentary". He watched a TV program about the five legendary Kings of Games (including Yuya), together with his parents.

In the ZEXAL-centered fic "Together In The End", Yushi is seen with his parents and his baby sister, attending the funeral of Yuma and his wife Tori Meadows.

In "Not Her", 9-years-old Yushi and 3-years-old Asuyu watch their mother comforting their father after the latter had a nightmare. The boy then carries the girl back to bed, much to her annoyance.

In "Children of Standard", Yushi and Asuyu start to bicker over watching TV, when their father suggest them to settle it with a Duel. The two siblings do so, watched by their parents and Yushi's best friend Amane, who came over because she and Yushi decided earlier on chat to hang out together that morning. Both siblings give their all to each other, culminating in a final turn that was very similar to an Entertainment Duel, and ending with Yushi's victory. However, Asuyu acknowledges the need to practice more and become stronger, vowing to beat her big brother one day.

Yushi admires his parents and wishes to be as great as them when he grows up. He's always all fired up to see his parents Dueling.

As both consider themselves actual children of Yuya and Zuzu, Yushi and Asuyu are very close, and sometimes take part in Tag Duels, just like their parents. However, their relationship is similar to the one between the Kastle siblings: they argue very often and annoy each other, leading to frequent Duels between them.

Yushi is also very loving of the other three children of the other counterpart couples, as they were raised as siblings.

Despite this, the antics displayed by Rise sometimes annoy him.

Amane is Yushi's best friend. Yushi has little other friends in Paradise City beside her, as most kids of their age tend to approach him just to know his parents or appear cool because they hang out with the son of the saviors of the world. Amane instead showed to be a genuine friend, and since then helped him deal with those annoying people.

This happened before they parted ways regarding Duel Schools, as he went to his grandfathers' You Show Duel School and she went to the LID. Since then, they decided to be each other's friend/rival, and they occasionally Duel in friendly matches between the two schools.

During days off, they often hang out together.

All in all, their relationship references that of Yugi and Téa before the start of the original manga. 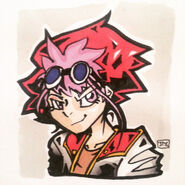 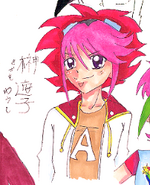 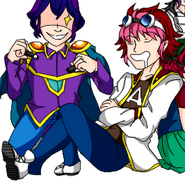 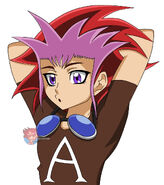